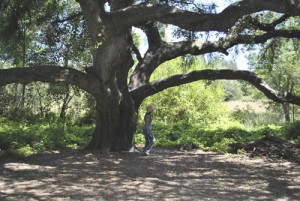 In Strega lore lives the story of Aradia, daughter of Diana, who lived in the 12th century. She traveled the countryside with the brigande (outlaw bandits) teaching the Streghe traditions to the peasants. She predicted a time in the future called “the return of the daughter” and return to the “old ways.” Her prophecy foretold of a resurgence of the Strega lineage and the wisewoman ways.

All Streghe are Daughters of Diana.

Aradia was born in 1313 in Volterra, a small town southwest of Florence. She displayed special abilities right away. Her parents were sure she would someday become a nun. However, Aradia’s aunt was a Strega. She recognized the lineage in her. As soon as Aradia was ready to learn, the aunt began to mentor her.

Aradia was initiated secretly at age 13. It was very dangerous because at this time the church was strongly opposed to the Streghe traditions. As an initiated Strega, Aradia began to have experiences in which she came to know the voices of plants and animals, the voice of Diana inside herself. She could not stay at home where her parents continued to urge her to become a nun. She left and wandered around for days until she came upon an army of brigande, Robinhood-like gangs who stole from the rich and gave back to the poor. The brigande took her in. While living with the brigande she learned of the slavery the peasants were forced to endure under heartless landowners.

To help the peasants, Aradia began to travel between villages offering Strega healing. Using the skills her aunt had taught her and drawing upon the power of nature, she performed deeds that many called miracles. She cared for many people. The peasants loved her. They called her La Bella Pellegrina (the beautiful pilgrim).

Aradia saw how these people, having lost their own traditions, were disempowered. They had forgotten their connection to the plants and animals, to the earth. She began to teach the Streghe traditions to the peasants

She was soon arrested by the Church for heresy and charged with treason. When the soldiers confronted her, she stood in her power before them and asked them to answer for the hypocrisy of the church. While Aradia was in jail waiting to be executed, there was an earthquake that destroyed the building she was being kept in. Word spread that Aradia had died. But she was seen again in the camps of the brigande. After that, a group of followers formed and she began to teach them in secret. Eventually, for her safety, Aradia needed to leave. She gave her followers nine scrolls and left to the east, never to be seen again. On the scrolls were the teachings of the Streghe and those have been handed down through the ages.

All rights reversed. This copyrighted material may not be republished without permission. links are encouraged.

Sources for this story are: