Diana is the Goddess of the Amazons. Diana is the Roman name for the Greek Goddess Artemis. She has two hounds that escort and protect her. She rules over the wild forests. She is a huntress. 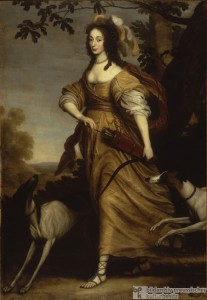 The Goddess Diana is essential to the Streghe. She is the patron Saint of the witches. All Streghe are “daughters of Diana.” Much negative press was aimed at Diana by the Roman Catholic Church who demonized her as the “Queen of the Witches,” especially for use in the inquisition.

At Lake Nemi in the Alban hills east of Rome, a temple to Diana once stood where vestal flames burned in honor of Her. No men were allowed in this temple. The temple stood on the shore of a volcanic lake, a crater lake, surrounded by a sacred grove of oak trees. Diana is always connected with oak trees. (For a long time oak trees in Italy were even called “Dianas.”)

This volcanic lake was called “The Mirror of Diana,” because on the full moon one could view the moon in the water perfectly from the temple above it. It is believed that women used to come and pray there for easy birth. Archaeologists have recovered clay models of the uterus left as offerings.

The lake as a mirror of the moon and offerings of uteri have deeper ramifications. Diana is a Lunar Virgin. Lunar virgins were women who could reproduce from themselves parthenogenetically with the help of the moon. (Parthenogenesis means reproducing with no need for male sperm.)

The research of Marguerite Rigoglioso, Ph.D., unveils that cults of divine birth existed in the ancient world. In divine birth cults priestesses engaged in rituals through which they impregnated themselves with particular souls at particular times for very specific reasons. In these cults, women reproduced parthenogenetically. Though we have forgotten now, Rigoglioso posits, and I believe as well, that all women have this power. Women once knew this and engaged with it in sacred and ritual context for deliberate and intentional purposes.

I suspect the temple at Nemi may have been carrying on a form of this ritual.

For more on the divine birth and parthenogenesis in the ancient world see:

Marguerite Rigoglioso: The Cult of Divine Birth in Ancient Greece and Virgin Mother Goddesses of Antiquity.