In writing the book The Strega and the Dreamer, I was overwhelmed by all the mountain imagery and mystery of my Italian roots.

Wondering if this European tradition of mountain worship was carried to America, I realized many mystical writers have been in deep relationship to mountains. One of them being the beloved American Nature writer, Henry David Thoreau (1817-1862). Thoreau had a special relationship to one of the specific mountains featured in The Strega and the Dreamer: Mt. Monadnock. 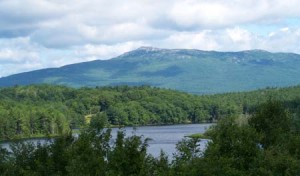 Mount Monadnock, (3,165 feet) located in the towns of Jaffery and Dublin, New Hampshire is, at current reports, the most climbed mountain in the world.

That is a lot of worship. This is a very special mountain.

Monadnock was named by the local Native American people, the Abenaki, “Monadnock, the mountain the stands alone or mountain island.”

In his short life, Thoreau climbed Mount Monadnock four times. He died at the age of 44 from tuberculosis. Though he lived in nearby Massachusetts, to get to this mountain was a long journey in Thoreau’s time. He traveled miles on foot from the train stop in Troy all the way to the base of the mountain and then walked up it. He brought a hatchet and axe in his pack and cut down black spruce saplings to build himself a base camp while exploring and communing with Monadnock. While there for four days in August of 1860, he kept rigorous notes about the flora and fauna. He focused on describing and appreciating the lichen and the blueberries that populate that place.

He likened the blueness of the mountain summit to the abundance of blueberries. He speaks about the morning and evenings on the mountain as “seasons” and describes them both in poetic detail.

“They who simply climb the peak of Monadnock have seen but little of the mountain,” he comments. “I came not to look off from it, but to look at it.” ( Where the Mountain Stands Alone. page 85)

In the novel, the main character, Eva, meets a New England doctor, Charles M. Chase. Chase, like Eva, has a deep relationship with the mountain. Being a well educated man, he is deeply influenced by Thoreau’s words and musings. Though Eva and Charles’ relationships to the mountain contain different philosophies and access points, both are fed and nourished by it. In this collective “Mountain Worship,” two strangers from different lands and traditions find commonality and mutual respect.

Where the mountain Stands Alone: Stories of Place in the  Monadnock Region, edited by Howard Mansfield

This entry was posted in Mountain Mysteries, Press and tagged henry david thoreau, monadnock, mountains, the strega and the dreamer. Bookmark the permalink.